Silent Salinity explores the relationship between water, global warming and culture. Through a three-year partnership with spatial ecologist Roger Fuller, I examined the dangerously increased salinity levels encroaching on local estuaries, and on consequently our freshwater resources.  Saltwater is essentially killing the estuaries. This work  is inspired by these conversations and tells the story symbolically through the medium of salt. Sarah Smith created a documentary film on the project: Conduit: The Art of Science Communication 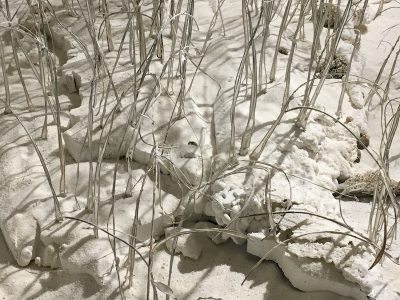 As the glaciers melt and the snow pack diminishes a perfect storm is brewing at the meeting of our shorelines and river estuaries. Where there was once fresh water, it is now saline. Coss created Ghost Meadow as part of the Silent Salinity project to visualize effects of global warming on the estuaries.

Re-written in wire is a journal entry by scientist Roger Fuller. This fictitious diary ponders the state of the estuary and describes what he finds walking through the flats when doing field work.

Posted in Sculpture and Installation