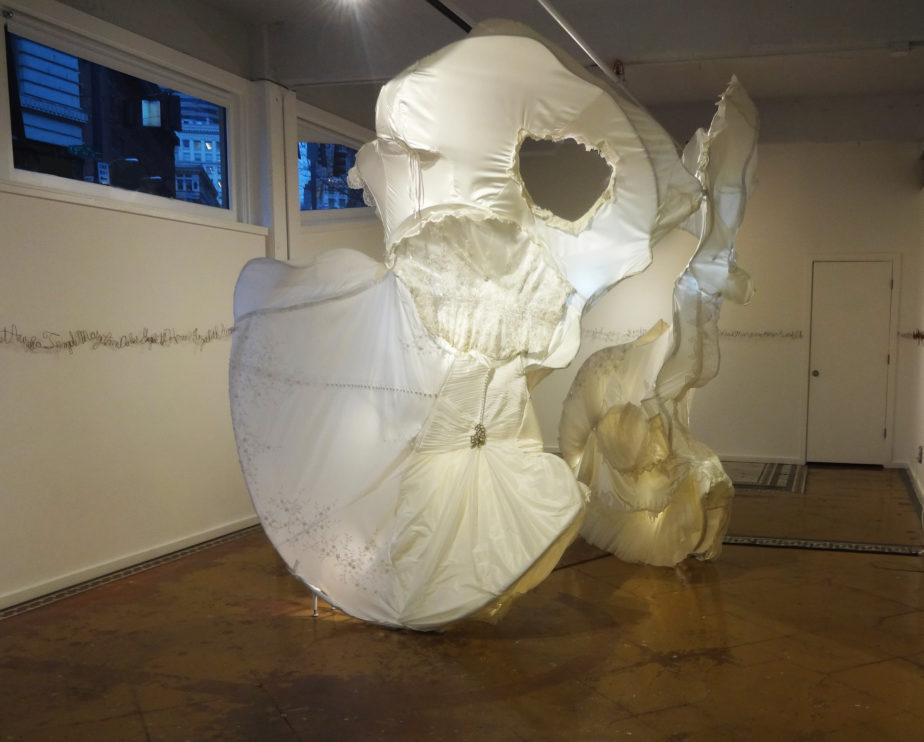 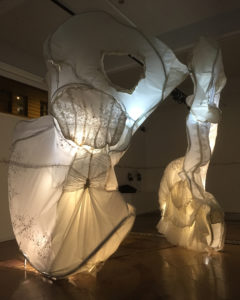 Traces is an installation that explores female identity, lineage, and cultural inheritance.  As a patriarchal society, we have created and perpetuated a legacy of lost identities and subservience in interpersonal relationships for women.

The sculpture Vow uses imagery of a human bone as a relic to present an allegory of life. I have chosen to use the symbology of a female pelvic bone to both celebrate life while questioning custom. Bones are the part of the body that endure beyond a single lifetime. They are the structure, an essence of humanity that lasts through time. Thirteen wedding gowns cover the framework of this large-scale 9’ tall pelvic bone to speak to the story of birth and rebirth, the ties that bind, a union of souls, cultural memory passed from one generation to another.

The accompanying wirework gives voice to my personal female lineage. Written in wire, the cursive script acknowledges hundreds of my foremothers birth names, each lost in marriage. These women and their names are honored here as in a family journal. Tracing the female lineage is a bit like chasing ghosts, each maiden name tied to a family patriarch and gone before its time.

The looped installation soundtrack, Eternal, portrays the story of a human life cycle. The soundtrack was created in collaboration with my two daughters. I found a recording of different heartbeats, at different tempos, providing the backdrop for the aural story. My older daughter Roxy created a composition that merges the heartbeat sounds with her tenor saxophone melodies and the rhythms of tap dance, which were created and recorded by my younger daughter, Sam. The piece reflects on cultural influences and the physical reality of a human lifespan. It is a story of lineage, heritage, and familial ties, which also celebrates the female perspective and experience.

You can hear the soundtrack here: https://soundcloud.com/marycoss/eternal

Posted in Light and Sound